Music is a part of every culture around the world. In fact, the ability to appreciate music is built into our brains, suggesting music has an evolutionary function. 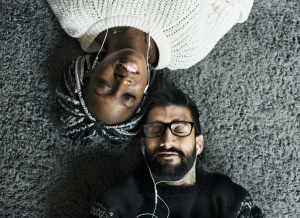 While listening to music just feels good, it also seems to increase social bonding. Some research suggests listening to music makes us more empathic toward other people, encouraging us to resonate with their feelings and care about their welfare. Music may also enhance our ability to consider what a person is thinking and feeling and to take their perspective—another aspect of empathy that can improve relationships.

Many music studies look at the long-term benefits of being a music listener or participating in a music program as a child. But can hearing music help us connect and empathize with someone right in the moment? A new study aimed to find out.

In this study, 60 university students were recruited to watch several 15-second videos in which a person recounts an autobiographical experience. In some cases, people in the video talked about a relatively mundane event, like moving into a new apartment, while other stories contained strong emotional content, like recalling a terrible accident or a loved one’s death.

While students watched these videos, the researchers randomly played either “emotionally neutral” music (such as Hans Zimmer’s “Redacted”) or very sad music (such as Dario Marianelli’s “Farewell”) in the background. After watching each video, the students expressed how they felt, how much compassion they had for the person in the video, and how much they wanted to help that person. They were also tested on their social reasoning skills—how well they understood the perspective of the person in the video. All of these could be signs of empathic connection.

Results showed that people watching the sad videos felt more sadness themselves (showing that they resonated with the other person’s feelings) and more compassion for the other person than those watching the neutral videos—not a big surprise. But these empathic feelings were strengthened by listening to sad music, leading to greater compassion for and willingness to help the person in the video.

“In a sense, there is a synergistic effect between having emotional background music and listening to an emotional narrative,” says lead researcher Brennan McDonald of Technical University Dresden in Germany. “Our social emotions are amenable to emotional enhancement through music.”

The music had no effect, however, on whether or not the students could reason about the other person’s experience and understand, cognitively, what they might be thinking or feeling. McDonald does not know why that would be, since past research seems to contradict that. But, he says, it makes sense that music might impact us more emotionally than intellectually.

“Music can produce powerful, genuine emotions across all of the emotions we can experience—fear, sadness, anger, and joy—and that may clue people into the emotions of the environment in which they find themselves and help them deal with social interactions,” he says. “But our ability to understand the thought process of another doesn’t seem to be as affected by music in the way that our emotions are.”

Why is this important to know? One major reason is that music surrounds us in our daily lives and may affect our feelings for others. Certainly, films capitalize on this, says McDonald, using music as a simple way to augment people’s empathy to care more about the welfare of their characters.

Using music to increase compassion more broadly is McDonald’s greater goal for this research. While music is not the only way to accomplish that—other art forms, like fiction and dancing, have also been shown to increase empathy, for example—music could be a powerful tool. After all, this study involved listening to just 15 seconds of emotional music, and it still made people care more about someone else and want to help them. Perhaps, if people listened to or played music together more, it could help build a more caring society.

“It would be very interesting to take our finding and extend it further, to see if music-making over a long period of time in a social context can enhance our real-world ability to empathize and feel compassion towards others, long-term,” says McDonald. “To test that is the next logical step.” As I page
through this Anthology
I often have the same feeling
that I have when I heard her voice
reading this poem
with a resounding
E C H O I N G
of when you need a prayer
notice that nothing all around you
is miraculously short of that
with the worldly unspoken invitation:
WHEN YOU DON’T HAVE A PRAYER
B E
O N E

I call it
B E I N G
SENSITIVE
CARING
IN TOUCH
VULNERABLE
OPEN
TRANSPARENT
EMPATHETIC
SYMPATHETIC
well, yes, even
A CARING CATALYST

Here’s the scene. . .
Actually, four of them. . .
When I came home around 4:45 there was no one home and so after changing, I flipped on the tv and knew I didn’t want to finish Dr Phil or begin ELLEN and I wasn’t crazy about the mumbo-jumbo on SPORTSCENTER, so with remote in hand I went to HBO and the first thing that came up was the ending of BRUCE ALMIGHTY:

ANYTHING?
Go ahead. . .
No one’s watching,
No hand in the air to admit that the scene might have put some dampness in the corner of your eye. . .
As BRUCE ALMIGHTY ended I switched it over to the ending of
MOULIN ROUGE:

NOTHING?
Oh, for me, yeah. . .
IT WAS ON
Lump-in-the-throat-can’t-swallow-want-to-primal-scream-cry. . .
and the before I could fully get one good
swallow
I switched the channel to the old 2005 movie
IN HER SHOES:

SOMETHING. . . ?
Not only because I’ve been a life long fan of
e.e. cummings
but because sometimes there are just
W O R D S
that a Heart shouts
and a mouth can never whisper
that says everything you ever wanted to say
but no way ever could
and yet. . .
HAVE
with THAT person
you know that living a life time with
can never be long enough
so there’s an Eternity
to have your never-do-you-part Lives
(I love you in THAT way, Erin)
and just seeing that scene. . .
feeling those words:
t e a r s
and even as I was getting the remote control wet
I flipped over to the final scene of Tom Hanks
BIG:

W E L L. . . ?
Is there anything better than not just
GOING HOME
but actually
BEING HOME. . .
I loved what Elizabeth Perkins character said right before this last scene when Hanks was trying to explain to her that he was really just a 13 year-old kid and she said, “WHO DOESN’T HAVE A 13 YEAR OLD KID LIVING INSIDE OF THEM?”
Oh, my, my, my, my. . .
I just clicked the tv off
and sat there in the dimly lit room
. . .the cat and the dog were both a little curious
about their odd owner/caregiver
who was anything but an
owner of his feelings
caregiver of his emotions
and loving every moment of
i t
. . .I need no
CRY BABY METER
it’s on
often for me
with a movie scene
a song
a well phrased line
a. . .