The group was attentive, engaged and conversational.  They gave me a standing ovation with my ending quote from George Washington Carver, “HOW FAR YOU GO DEPENDS ON BEING GENTLE TO THE YOUNG, COMPASSIONATE TO THE ELDERLY, SYMPATHETIC OF THE STRIVING AND TOLERANT TO THE WEAK AND THE STRONG.   .   .BECAUSE ONE DAY, ONE DAY, YOU WILL HAVE BEEN EACH OF THESE.”

Paul came up to me after this as I was standing around having coffee with these guys as they began filtering out of the room.  He introduced himself to me and asked if he could give me a gift. He handed me his typed out paper and told me that the first paragraph was his MISSION STATEMENT. His eyes were kind and reminded me of my dad’s, not so much the color, but the soft kindness that glistened from them.  He spoke softly and annunciated each word as he read the SPIDER INSTRUCTION SHEET to me.  He offered me his hand and didn’t shake it so much as held it firmly between us when he told me, “I’m old.  I know I can’t change the world, but hopefully by being kind to one person at a time, I can change them, make them have a better day and they can go and do the same for some one else.”  I told him how much I liked his marketing plan, especially how he carefully implemented it so personally. Any time I talk to a group of people I usually tell them that I am not here for the group today, I AM HERE FOR JUST ONE PERSON (and then I literally pause for as long as it takes me to look into the face/eyes of each person) I JUST DON’T KNOW WHICH ONE  And I don’t.  Little did I know when I showed up for a Men’s Breakfast Group that I WAS THE ONE that day. During this NATIONAL MONTH OF POETRY I have used poems that have inspired me to write poems.  I began the month with a poem by Mary Oliver and could spend months using her poems that have countlessly inspired me not just to write but to pause, reflect, ponder what can’t always be seen, heard, tasted, smelled or touched but most deeply felt.   .  . here’s hoping it does the same for you in the NOWNESS of your TODAY:

It doesn’t have to be
the blue iris, it could be
weeds in a vacant lot, or a few
small stones; just
pay attention, then patch

a few words together and don’t try
to make them elaborate, this isn’t
a contest but the doorway

into thanks, and a silence in which
another voice may speak.
— Mary Oliver

They are no longer clouds
but brightly striped ribbons Are you as happy as you want to be? Does everyone else’s life seem perfect? And yours…well, not so much? Many of us tie our happiness to external factors…or feel on the short-end of the stick when comparing our lives to those of other people. But, sometimes, appearances can be deceiving. In fact, freeing ourselves from perfection can be one of the keys to being happy with who we are.
T     R     U     T     H:
If you can’t find happiness inside yourself, you’ll never find it in the outside world, no matter where you move. Wherever you go, there you are. You take yourself with you. This is the essence of happiness—learning to find inner contentment in any situation.
H  I  N  T:
If you truly want to find a little HAPPINESS
try just giving a smidgin’ of it
to Someone
ANYONE
and you’ll be amazed that the Ripple you begin
will come
Crashing back on your Shore, too.        .        . It reminds me of the words of the poet,

i held an atlas in my lap

ran my fingers across the whole world

where does it hurt? Our Broken Pieces
never cut
wound
or cause scars

The closing
would be the
worst injury
of all Sing the song not yet written
yearn to be what is needed
and not what is thought to only be wanted
so that we can become
to each’s other
what can’t be a promised land
but a covenanted sacred soil
when sown
we forever grow together
and spreads beyond
whatever could be promised
(Feebly written after reading, Athey Thompson) Being grateful seems to have a lot of positive effects on our lives. In fact, grateful people may have better sleep, healthier hearts, and fewer aches and pains. 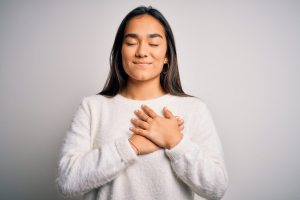 But what is going on in our bodies when we’re grateful, that might help us be healthier? A couple of recent studies aimed to find out.

In the first study, 61 healthy women between the ages of 35 and 50 were randomly assigned to either a six-week online gratitude activity or a writing activity (as a comparison). Once a week, the gratitude group were given a writing prompt that asked them to write about someone they were grateful for (for example, “Think of someone in your life who you feel like you have never fully or properly thanked for something meaningful or important that they did for you”). The control group wrote about neutral topics (“Think about the longest distance that you walked today”).

Before and after the six weeks, the participants reported on how much they tended to offer support or receive support from other people and provided a blood sample, which was used to check for the presence of inflammatory cytokines (interleukin 6 and tumor necrosis factor-α). Inflammatory cytokines are linked to chronic diseases of aging, like diabetes, atherosclerosis, and even cancer.

After analyzing the data, the researchers found that women assigned to the gratitude condition did engage in more supportive care, which is consistent with the idea that gratitude may inspire people to “pay it forward” and help others. But they didn’t find any significant drop in cytokine levels—meaning, no improved immune function. Naomi Eisenberger, director of the Social and Affective Neuroscience Lab at UCLA and a coauthor on the study, was a little surprised by this.

“You read all the news stories about gratitude and you assume you’re going to see these magical beneficial effects. We didn’t see that,” she said. “The effects were actually harder to see than we thought; they were subtler.”

To get at what might be going on, she and her colleagues looked women’s supportiveness, whether or not they’d participated in the gratitude activity. Here they did see an effect: Women who engaged in more supportive care had lower levels of interleukin 6, suggesting that supportive care (and not gratitude, per se) might improve immune function. Gratitude could affect inflammation, perhaps, but only if it leads to more support for others.

“When people feel grateful, one of the first things they want to do is give back,” she says. “Maybe that doesn’t lead straight to better immune function. But it does lead to more support-giving, and that’s interesting.”

Is gratitude good for our brains?

These findings still left an open question for the researchers: Could experiencing gratitude affect people’s brains in a way that promotes better health? To find out, Eisenberger and her colleagues did a second studylooking at how gratitude affected brain centers associated with support-giving and responding to distress, both of which are tied to better health.

Drawing from the same participants, they used MRI scans to monitor brain activity while the women were shown names of people they felt grateful for and asked to either think about why they felt grateful to the person or to describe the person’s physical appearance. Occasionally, an image of a threatening face was flashed on the screen to startle participants and induce a threat response.

Participants experiencing gratitude didn’t have more neural activity in the caregiving centers of the brain than the control group. But those who’d reported high levels of support-giving had a healthier response to the threatening imagery (decreased amygdala activity) after focusing on gratitude. In other words, for highly supportive people, feeling momentary gratitude seemed to play a role in soothing their stress response—a possible pathway to better health.

“There seems to be something about people engaging in more support-giving over time that makes them less threat-sensitive when primed with gratitude,” says Eisenberger.

This finding mirrors previous work showing that volunteering or giving to others improves health, says Eisenberger. On the other hand, it contrasts with some people’s views that feeling gratitude in and of itself is key to better health, she adds.

“Our study brings up an interesting question of what contributes to better health: Is it the emotion of gratitude, or is it actually engaging in behaviors that help somebody else?” she says. “I don’t know for sure, but maybe it’s tied to behaviors more than to feelings.”

She also mentions that some of the people in her studies reported having trouble feeling grateful. That could be a barrier when it comes to promoting gratitude for improving health.

“These effects didn’t seem to happen for individuals who were higher in things like depression and stress,” she says. “So, I think for those individuals, a gratitude intervention can sometimes backfire.”

Though Eisenberger believes much more research needs to be done to know for sure, her work shows that the effects of gratitude on health may be more nuanced than past research suggests. It doesn’t mean gratitude doesn’t play a role—after all, it seems to encourage more kind and helpful behavior. But it may only play an indirect role.

“If we’re trying to take care of our own health, maybe the best way to do that is helping take care of others,” says Eisenberger. “One way to getting to helping other people could be through experiences of gratitude. But it’s not necessarily the only way to get there, either.”