I have said for a long time now
the only day we celebrate 365 days a year
or for that matter;
E N D L E S S L Y
is Halloween
and now for the past few months
(literally and figuratively)
it feels worse than
Halloween gone
Bill Murray’s GROUNDHOG’S DAY
which makes us all begin to
wonder:

What We Lose When We Hide Our Smiles Behind a Mask 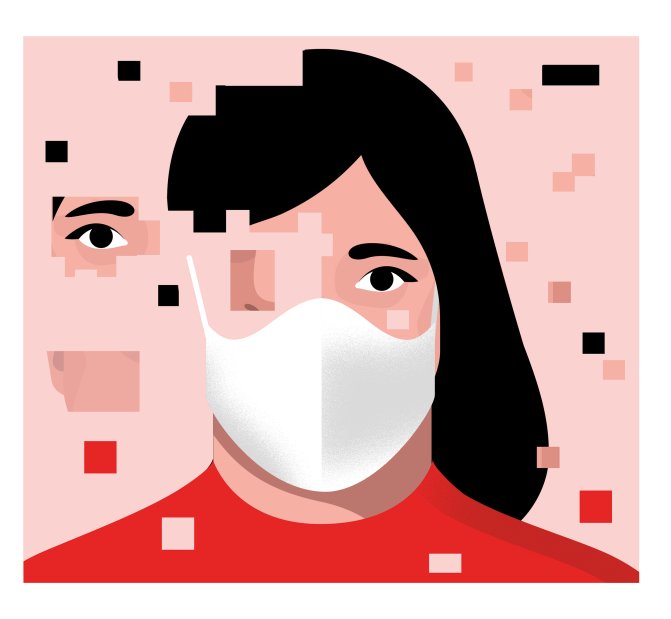 Illustration by Nathalie Lees for TIMEIDEASBY; It seems that we may not be the only ones
W O N D E R I N G
BELINDA LUSCOMBE  is an editor-at-large at TIME and the author of Marriageology: The Art and Science of Staying Together has pondered a few of these thoughts as well. . .

Miss Belinda shares, “I miss smiling. I don’t miss it in the inspirational poster “the whole world smiles with me” way. I don’t miss it, as another poster says, because I can no longer “intimidate those who wish to destroy me.” I don’t miss it because “happiness looks gorgeous on me,” although I did put in three very formative years of hard time in the orthodontia trenches–20 months of braces and six retainers–so it looks at least marginally better than it used to. . . .”

I miss smiling because it’s one of the handiest utensils in the communication drawer and my mask has locked it away. Yes, it’s just a facial expression: a deployment of the zygomaticus muscles, sometimes authentic, sometimes a placeholder because the real emotion we’re feeling is best not expressed. But as humans, we learn at the age of approximately 42 days that smiling is a useful way of getting people to feel good about themselves and therefore us. (The “world smiles with you” thing actually works–for babies.)

We continue to refine the way we use that smile to communicate information–from “you’re here!” to “you’re cute” to “you’re not meant to take that seriously, although you also kind of are”–until we no longer have teeth. And now, suddenly, those skills, all that practice, are useless. We have lost our favorite communication gizmo just when we need more ways to connect than ever.

Trying to interact with other humans without being able to smile is the facial equivalent of communicating via text message; it’s easy to be misunderstood. Your expression and words lack context. People wonder: Are you wincing at me? Are you grinding your jaw? Do you just have a lot of crow’s-feet? Was what you said an insult or a joke?

According to Paula Niedenthal, a psychologist who heads up the Niedenthal Emotions Lab at the University of Wisconsin–Madison and has studied facial expression extensively, there are three types of smiles: those that express pleasure at a reward or surprise, like when you get to see your friends in person after a prolonged separation (soon, please); those that convey a desire to be friendly, or at least non-threatening, which she calls smiles of affiliation; and those that show dominance, like the one Dirty Harry gives when he asks a certain punk if he feels lucky.

Her studies have shown that it’s harder to tell the difference between affiliative smiles and dominant ones if you can’t see the lower half of the face. In those situations, people have to rely on other clues. She gives the example of walking a dog that suddenly barks at a passerby. A quick look at an unmasked person’s face will confirm whether the passerby is smiling because he thinks he’s much better with his dog than you are or smiling because his dog is also occasionally silly. Behind a mask, this distinction is not so clear.

Niedenthal predicts that as mask use stretches on, people may rely more on the context of the situation to tell them how to interpret an interaction. “They will imagine that the context confers a reaction that is obvious, which of course will get everybody into a lot of trouble, because people in our culture respond with high variability to the same context,” she says.

BUT I have tried to compensate
for the communication gap by enhancing my other gestures. Upon approaching strangers in the street, I want to let them know that I am harmless and wish them well. In hard times, this message feels particularly urgent. Not being able to smile at them has forced me to wave or do a weird fighter-pilot-style salute. If I’m pulling aside to let them pass and can no longer offer an encouraging “you first” smile, I am reduced to airport-marshal gesticulations, which are about as effective as talking more loudly to someone whose language you don’t speak.

But it’s not just the recipient who gains from a grin. Smiling affects the smiler too. Studies have shown that it enhances the mood that produced the expression and helps us recall happier times. “Facial expression is not just out-put from the brain but also feeds back to the brain and has some consequences for subjective experience,” says Niedenthal. “There is good evidence that smiling naturally has some effect on your ambient emotional state.” In other words, masks may be making us more morose.

It almost never helps a situation to tell people to smile, so I won’t, but I’m going to keep beaming, even if it can’t be seen and sometimes is not entirely authentic. A fake smile, after all, is often given with good intentions, just as a mask is sometimes worn not to hide but to protect.

And then there’s
Steve Wilson and The World Laughter Tour. . .
when I went to his two day workshop a few years ago
and became a Certified Laughter Leader
I still remember
one powerful lesson
that even a fake laugh
is a beneficial laugh;
a FAKE SMILE
still,
physiologically
is immensely beneficial
by relieving stress and enhancing
a calm, creative, good mood. . .
So here’s the deal:
(ESPECIALLY)
BEHIND THE MASK
the best way to assure a smile
IS TO
(CREATE)
GIVE ONE

more pages of a calendar

than you can begin

If we all had a

would yours have broken from

triggers the release of endorphins, the body’s natural feel-good chemicals.  Endorphins promote an overall sense of well-being and can even temporarily relieve pain.            .             .

if you have an hour

if you have a day

if you have a week

if you have a month

if you have a year

if you have a life

if you have but just a mere

So when’s the last time you

Maybe that’s not the question

is when is the and then how about I  Bet it will make you feel better—

gave us a small but powerful lesson

why don’t you do what he suggested we do,

put it sideways into the your mouth

(I  ILLUSTRATED  IT  ABOVE)

“stimulates our brain’s reward mechanisms in a way that even chocolate, a well-regarded pleasure-inducer, cannot match.     .     .”

Smiling just doesn’t help you on the inside,

it also works to your advantage from the outside.

to be more likable,

When you smile, your brain is actually aware of the activity

and keeps track of it;

Shaun Anchor, in his book,

Sondra Barrett claims in her book,

“.  .  .that when you let go of tension–an outcome that can be achieved through smiling–your cells let go of their rigidness.  .   .and this could end up saving your life;  there have been cases where cancer patients go into remission after letting go of a big stress factor.  .  .  .”

is a great thing for your life.

knock you to your knees

let the funk run out

best fact of all:

sideways in your mouth and keep there for a minute

while you’re standing in line in the  10 or less aisle at the grocery store with a person who has a cart and a half full of goods in front of you that’ll be paying with a check and forgot their license ID in the car.   .   .

Make no mistake about it

that’ll break the camel’s back

but there’s quite a few

Here’s to making the Universe Smile

one straw at a time

or in the worst case scenario

because you know the ultimate secret:

When’s the last time you’ve had a good laugh?

I became a Certified Laughter Leader

under the direction of the fantastic funny man

You want to know what I noticed

WHAT   HAPPENS   PHYSIOLOGICALLY   WHEN   YOU   LAUGH

You’ll activate an Amusement Park inside your body

to your tear ducts

to your endorphin explosion release

to your reduction of pain center activation

more jealous than a Sea Shore without an Ocean

but the best antidote for the

or just all out

is  not  just  laughing

but laughing with someone else

(go ahead–try to hate someone you laugh with)

making someone else laugh

Did you hear the one

It takes more muscles to frown than it does to smile

Dr. David Song (University of Chicago Medical Center) recently did this study on the very topic and the average frown requires 11 muscles while the average smile requires 12

but this method of counting the number of muscles used by Dr. Song doesn’t take into account variables like the energy used by each muscle or that some

in some are more developed  than in others

You can send in all of your comments of THANKS

quickly followed by the all more important MORE

Even though smiling uses more muscles, it’s believed that it takes

people tend to smile more, which means the relevant muscles are in better shape!

Most primates, especially apes, have many of the same muscles that we do and use them to express similar emotional information.  Chimps that hunt in groups use only non-verbal cues to relay information and to remain organized.

Humans are born with the ability to smile,

it’s not something we learn. . .even blind babies are able to smile.

Back in February, I attended and completed and became certified as

With Steve Wilson and the World Laughter Tour.

I loved a simple technique he taught us with a straw.

you find it impossible to smile

stick a straw in your mouth between your teeth

for a few minutes

Here’s the deal with Smiling

(or for that matter, laughing)

Don’t believe me. . .or anyone else